Gen Y Speaks: I was a scholar and civil servant for 12 years before opting to pursue my passion for art full-time

Available at Design Orchard: A Showcase of Homegrown Artists and Designers 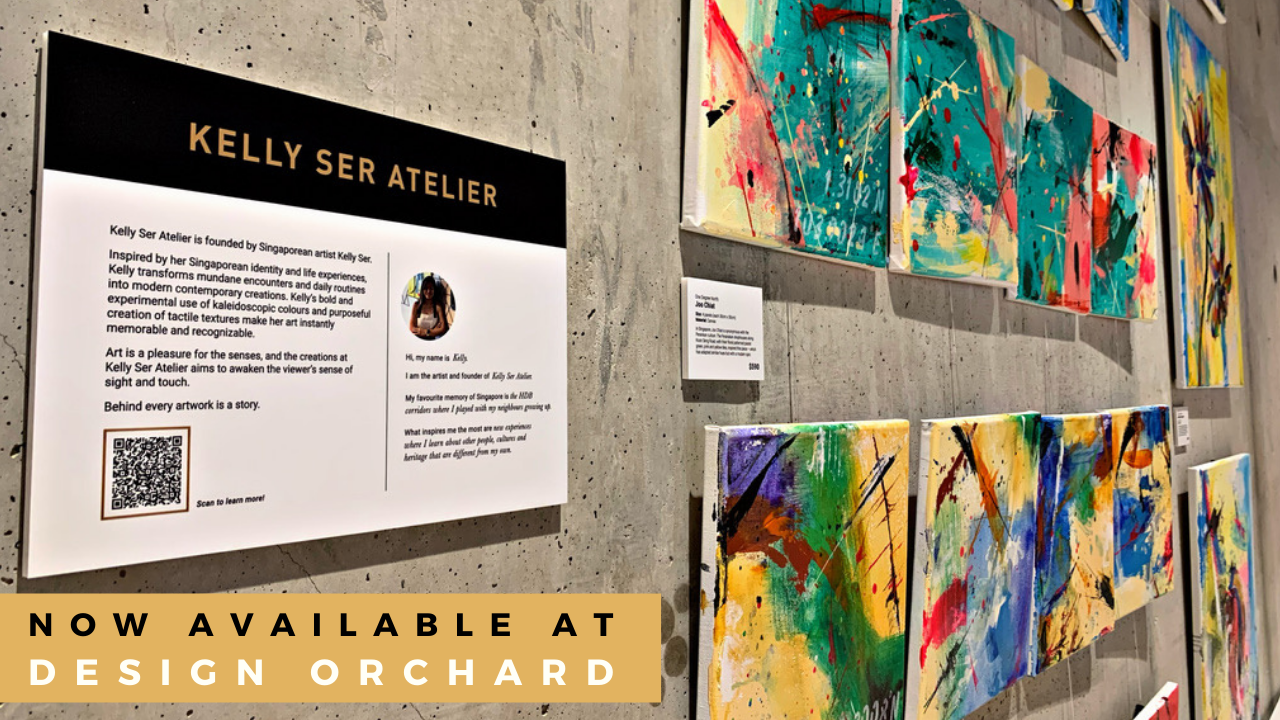 Feeling incredibly blessed and thankful, and still reeling from the fact that Kelly Ser Atelier is now available at Design Orchard. You can shop my artworks in a space that celebrates Singaporean creations, and on one of the most famous streets in the world – Orchard Road.

From the initial conceptualisation/design preparation/creation of the samples pieces, to proposal submission, panel pitching and eventually receiving the good news and then more painting and curating the right pieces for the showcase – the entire process was a small step for human kind but a big milestone for me and my brand. 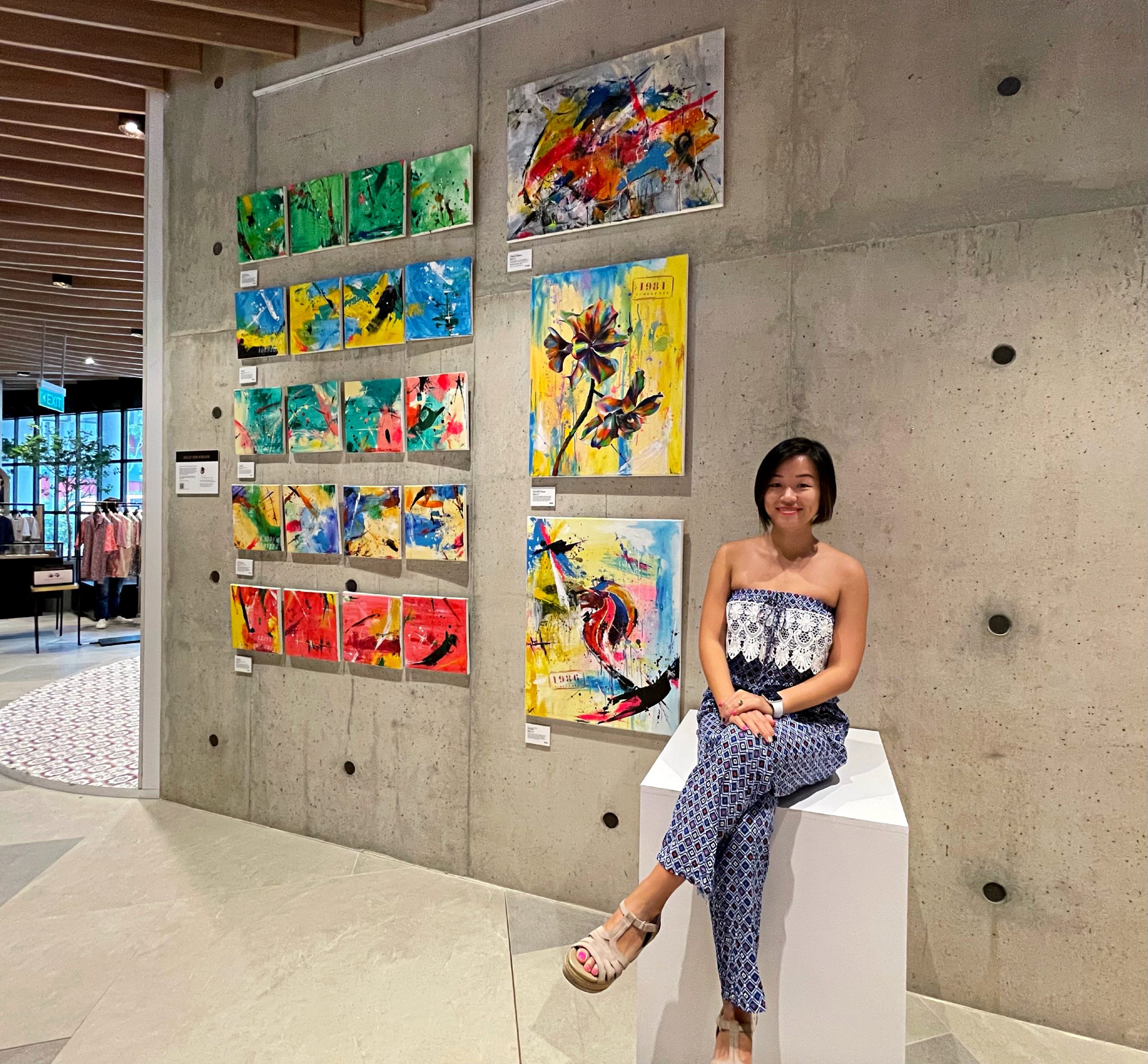 The gallery wall at Design Orchard

I first started my art journey as a way to have a balanced lifestyle and to avoid becoming a workaholic. Over the years, Kelly Ser Atelier grew into a platform that I could leverage and work with partners to give back to society through charity art projects and wellness talks. And now for me to be recognised as a local designer and creator, and be given the opportunity to share a space with some of the local brands that I admire is such a privilege and honour.

Inspiration behind the 3 collections by Singaporean artist Kelly Ser

‘One Degree North’: Inspired by memorable landmarks around Singapore

At only 728km², Singapore is one of the smallest countries in the world. What we don’t have in land area, we more than make up for it through conservation of our heritage, preservation of natural landscapes and enhancement through the built environment. The ‘One Degree North’ collection comprises 8 artworks each with 4 panels, and is inspired by memorable landmarks around Singapore, each telling a story about the area/landmark and its significance to Singapore.

Decipher where the coordinates on each artwork refers to, and you will know the painting title. 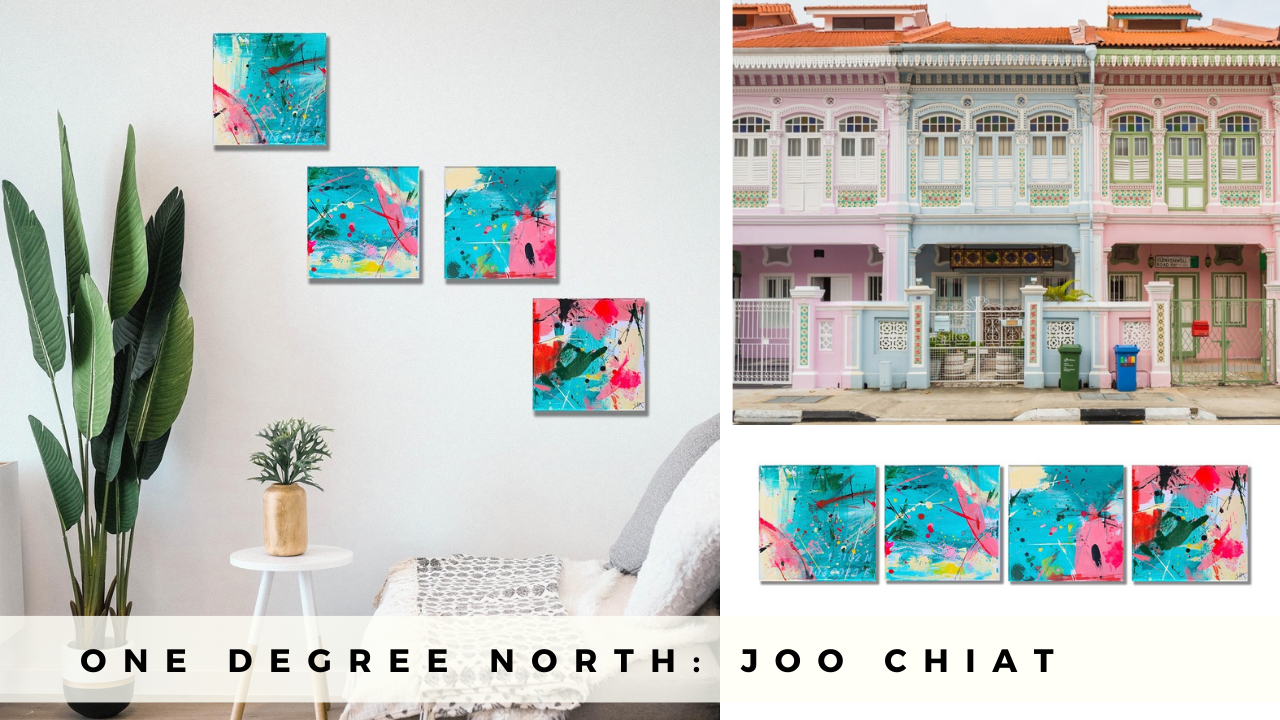 The Peranakan shophouses along Koon Seng Road, with their floral patterned pastel green, pink and yellow tiles, inspired ‘One Degree North: Joo Chiat’ – which has adapted similar hues but with a modern spin. 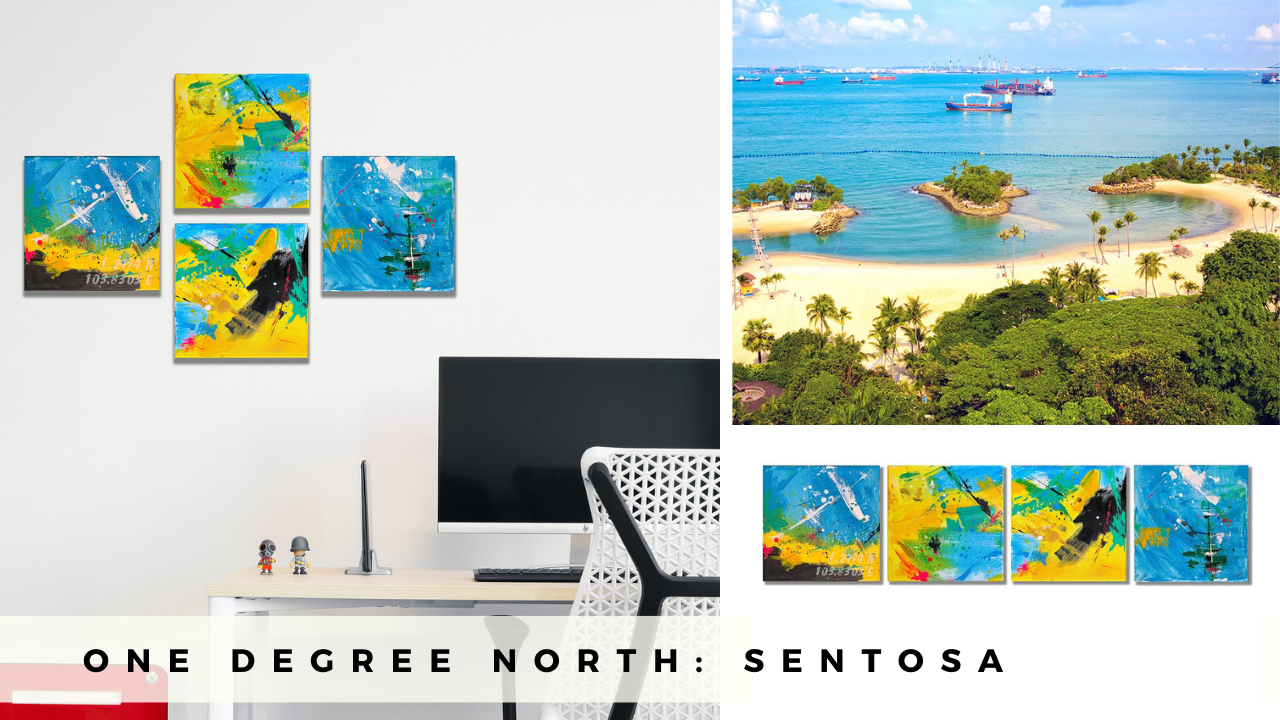 Sentosa is a resort island off Singapore’s southern coast. Inspired by its beachfront and gentle lagoons, I created ‘One Degree North: Sentosa’ to bring the beaches indoors, and to enliven the space through the golden sandy beaches and calming blue lagoon. 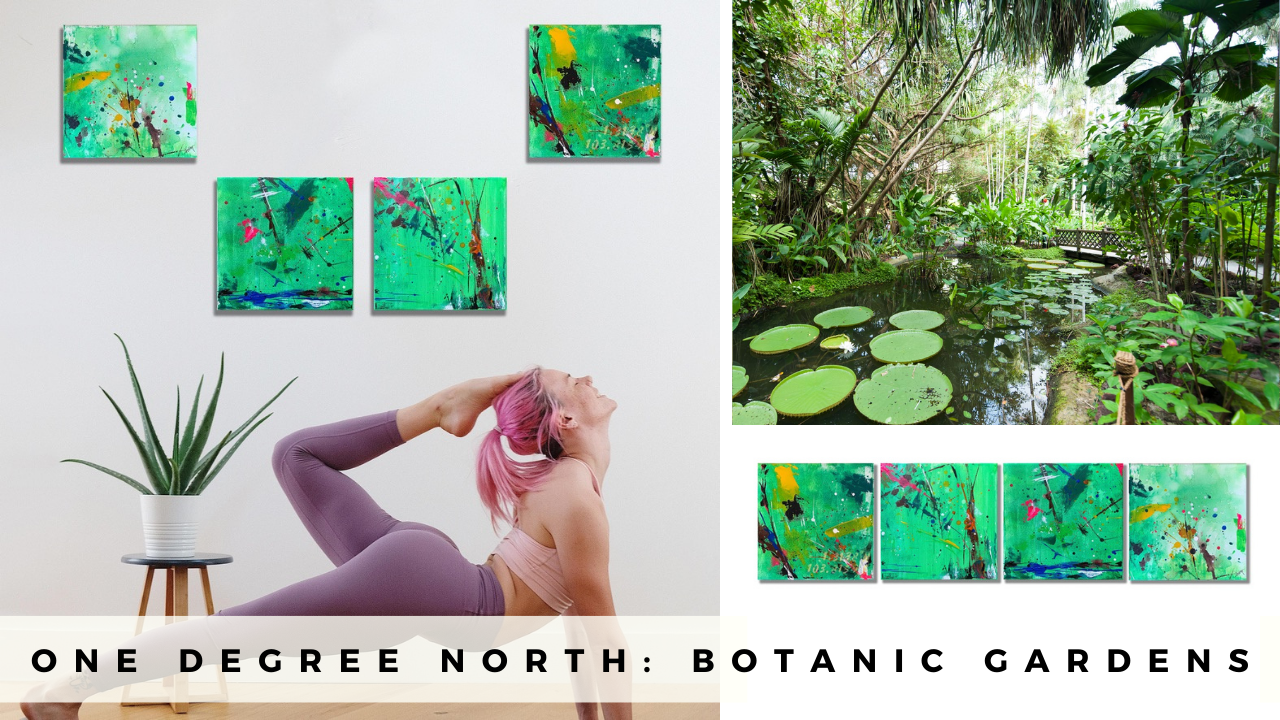 Over 160 years old, the Botanic Gardens houses 120,000 plant species native to Singapore and the region. Its lush greenery inspired ‘One Degree North: Botanic Gardens’, which exudes peacefulness, tranquility and renewal. Can you spot the Symphony Lake, bamboos and colourful orchid accents?

Each painting is created in my signature contemporary and tactile style, and can be displayed in various permutations depending on your room decor needs. View the full collection here.

When someone mentions ‘Singapore’, what comes to mind?

Despite its small land footprint on the world map, Singapore has taken huge strides and big leaps since independence to transform into one of the most cosmopolitan cities in the world. In Singapore’s transformation journey, iconic national symbols and landmarks were created along the way to represent Singapore in the world, and unite all citizens as one.

Created in my signature contemporary and tactile style, each piece in the ‘Not Just a Little Red Dot’ collection is inspired by an iconic national symbol or landmark from significant milestones in Singapore’s history and present day developments.

The year when the symbol was created or when the landmark was completed is ‘stamped’ on the artwork, serving as a timestamp marking its historical significance at various points in Singapore’s history.

Unveiled in 1981 as Singapore’s national flower, the Vanda Miss Joaquim was chosen for its resilience and year-round blooming quality. ‘Not Just a Little Red Dot: Vanda Miss Joaquim’ is my take on the orchid, and I chose a vibrant colour palette to symbolise the confluence of ethnicity, beliefs, gender, culture and all things diverse in Singapore, and the country’s never ending efforts in striving to achieve a balance and embrace the beauty in diversity. 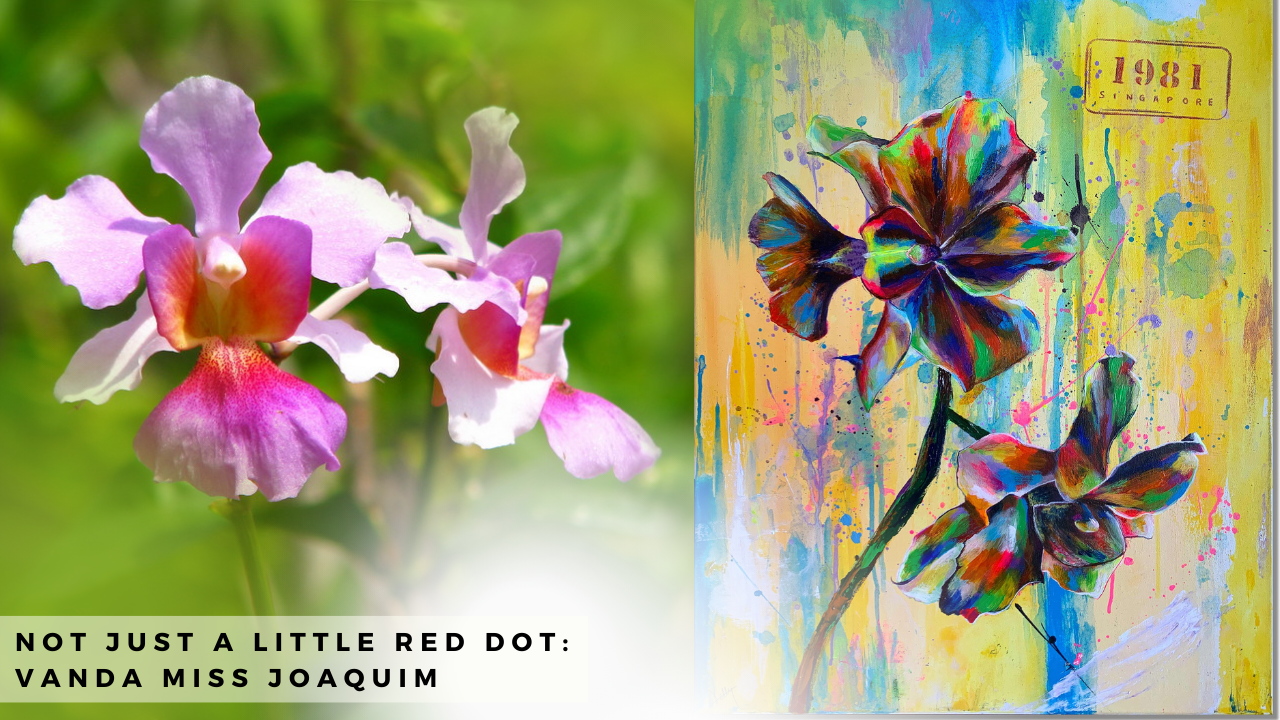 ‘Not Just a Little Red Dot: Vanda Miss Joaquim’ symbolises the confluence of ethnicity, beliefs, gender, culture and all things diverse in Singapore, and the country’s never ending efforts in striving to achieve a balance and embrace the beauty in diversity.

The Helix – You can’t miss this landmark bridge located at the Marina Bay. Inspired by the geometric arrangement of the DNA, the opposing double helix structures that make up the Helix Bridge is both a scientific and architecture marvel. In line with the bridge’s symbolism of ‘life and continuity, renewal and growth’, I took inspiration from the DNA replication process, and the web of interconnected biochemical processes needed to sustain life when creating ‘Not Just a Little Red Dot: The Helix’.

‘Not Just a Little Red Dot: The Helix’ takes inspiration from the Helix Bridge and the web of interconnected biochemical processes needed to sustain life.

‘A Chance of a Lifetime’: An Homage to Singapore’s founding father Mr Lee Kuan Yew

Singapore’s founding father Mr Lee Kuan Yew once described the opportunity to remake Singapore as ‘a chance of a lifetime’. He did indeed seize this chance, and together with his fellow urban pioneers, built a nation when there was none. The ‘A Chance of a Lifetime’ collection is inspired by Mr Lee Kuan Yew’s visionary plans for Singapore, and celebrates the nation’s transformation over the years and the journey of creation of the Singapore that we see today. 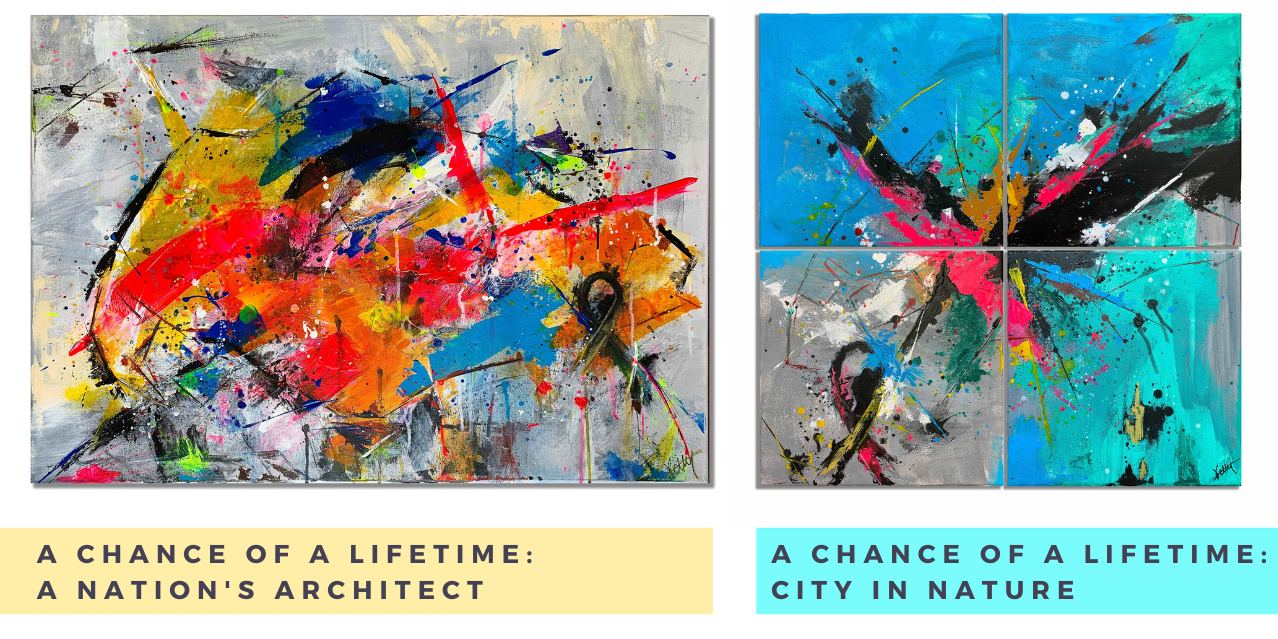 Singapore’s founding father Mr Lee Kuan Yew was the visionary architect of modern day Singapore, who believed in the nation state’s potential when others did not. He harnessed social cohesion despite religious and ethnic diversity, nurtured a Garden City decades before sustainability became a buzzword and built an economy from scratch and made it one of the best places for businesses globally. Most importantly, he built a nation when there was none. ‘A Chance of a Lifetime: A Nation’s Architect’ represents the confluence of ideologies, ethnicities and beliefs in Singapore, and takes inspiration from Singapore’s integrated planning approach and the colour coded URA Master Plan.

The occurrence of greenery and foliage when you stroll along the street or look out of a motor vehicle is not by chance – it is due to the foresight and perseverance of our urban pioneers, lead by our founding father, Mr Lee Kuan Yew, to always balance development and greenery hand in hand. May ‘A Chance of a Lifetime: City in Nature’ be a constant reminder that despite the disruptions that Singapore will have to navigate going forward, let us always remember to maintain and grow our green and blue spaces.

Design Orchard is an integrated retail and incubation space that puts Singapore’s designers and their creative pieces in the limelight. This 2.5-storey building comprises a retail showcase, an incubation workspace exclusively for designers, and a public amphitheatre that plays host to a range of dynamic events all year round. Designed by WOHA Architects, the Design Orchard building is tiered away from the vibrant Cairnhill-Orchard Road junction to form a public rooftop public space and garden.

Situated at the very heart of the beloved shopping district it was named after, Design Orchard cultivates budding local designers to grow internationally. 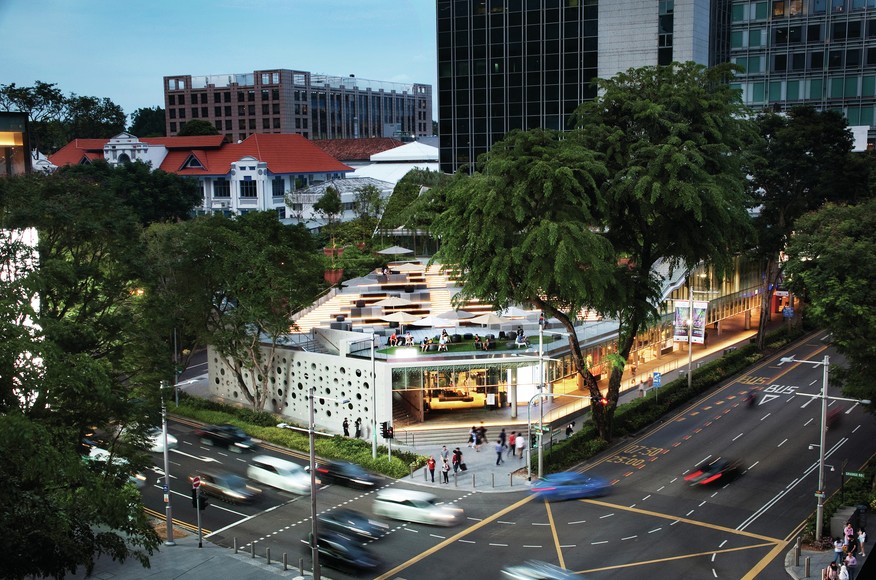 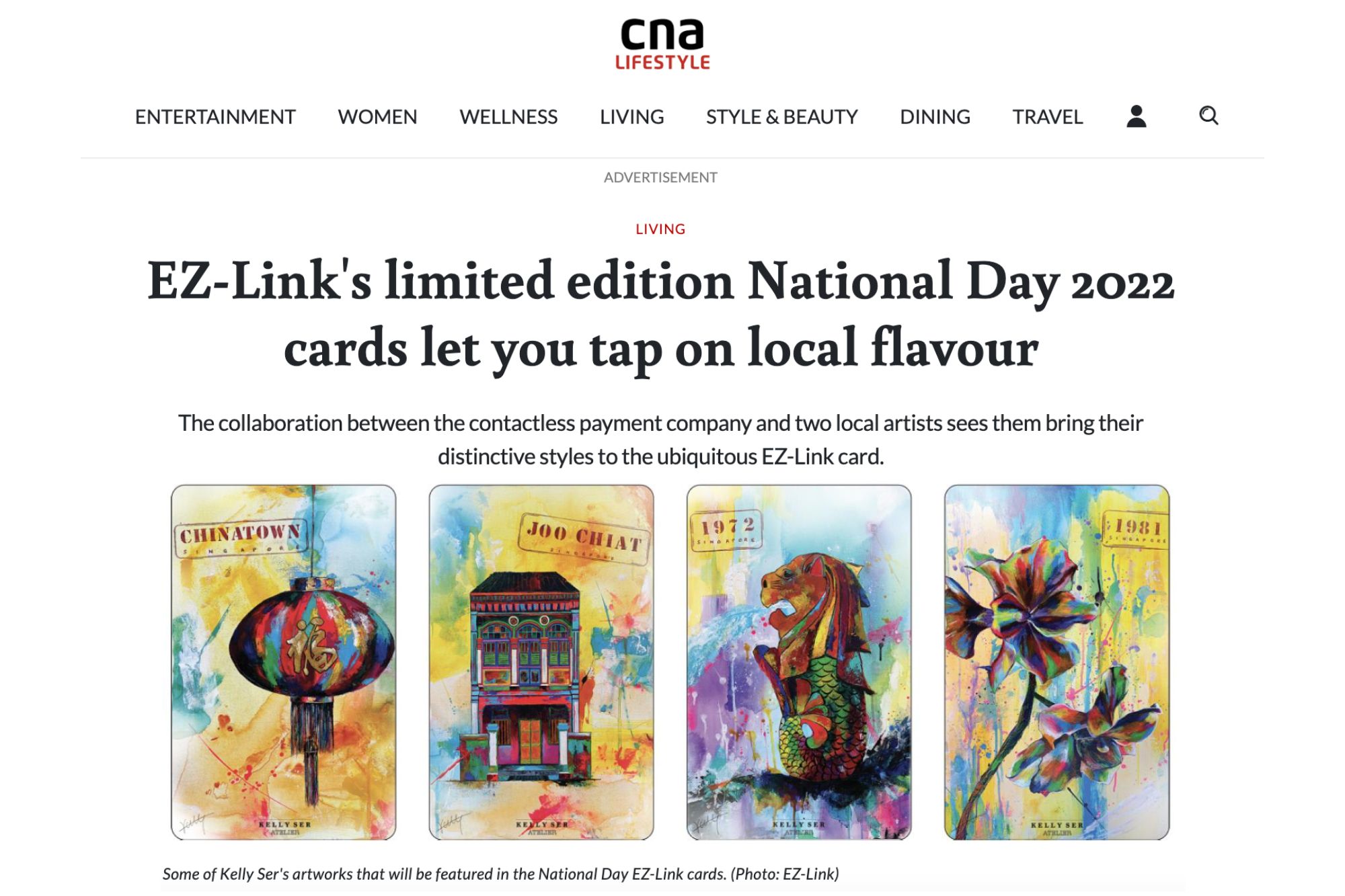 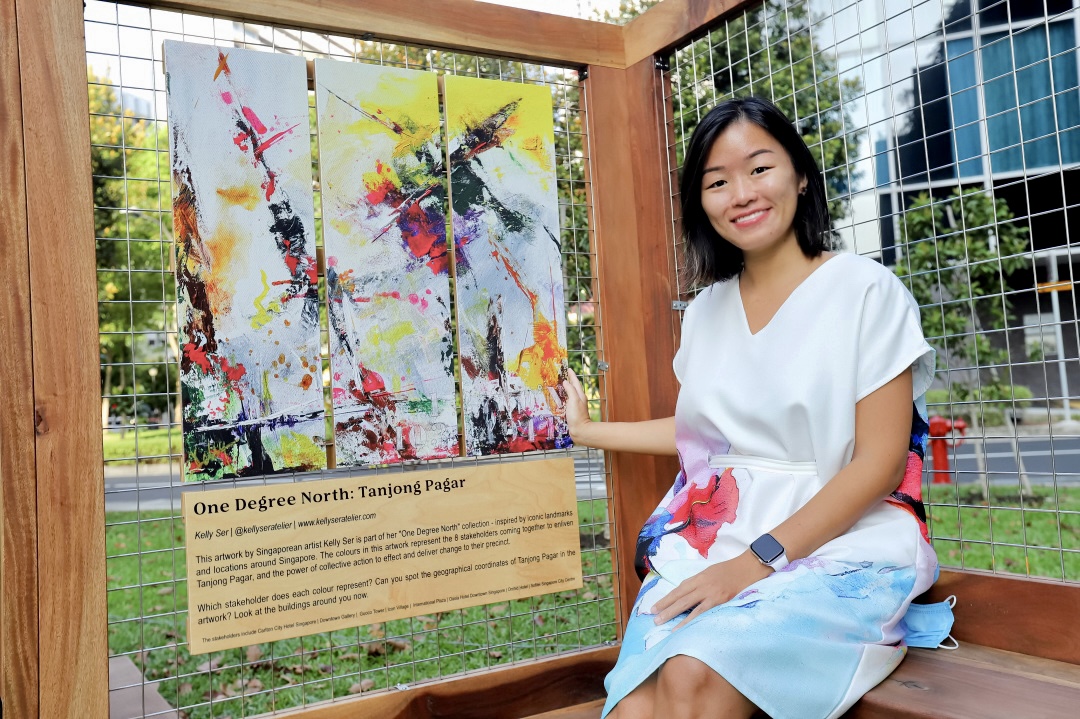